Nefarian is a hero that the player can pick in the Battlegrounds game mode. 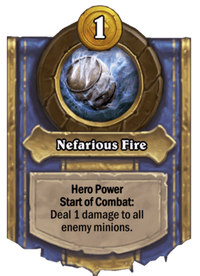 Nefarian's Hero Power is relatively insignificant early on but can be very powerful in the late game. It pops all enemy Divine Shields, crippling late-game builds that rely on Divine Shield: primarily Mechs, Bolvar-based Divine Shield compositions, and Murlocs, the latter of which are infamously powerful in the late game, although Menagerie and Dragon builds include a few Divine Shield minions as well. It has an advantage over Unstable Ghoul in that it doesn't take up board space or affect your own minions, and it also counters George the Fallen, another powerful late-game hero. However, Beasts, Demons, and Pirates almost never have Divine Shields and as such are nearly unaffected by it. Surviving the early game is important for Nefarian as his Hero Power offers very little advantage early, but if he survives, his Hero Power makes him a force to be reckoned with.