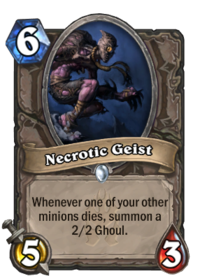 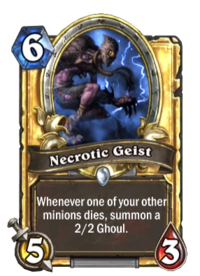 Whenever one of your other minions dies, summon a 2/2 Ghoul.

An eye for an eye, and a ghoul for a ghoul.

Necrotic Geist is a common neutral minion card, from the Knights of the Frozen Throne set.

Necrotic Geist can be obtained through Knights of the Frozen Throne card packs, or through crafting. 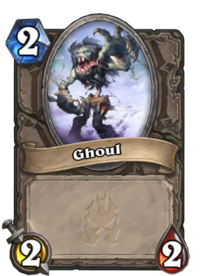 Necrotic Geist has a very useful effect for decks that focus on low cost minions, because having a lot of minions that die easily allows it to summon a lot of 2/2 Ghouls. It works well in a murloc deck. However, its high cost and low health make it an easy target for your opponnent's spells or minions, as it can be killed even by a 3 mana minion or, for some, 2 mana. It is very useful when the board is under the player's control as it can easily be protected under Taunt minions, even if it still vulnerable to damage or minion destructing spells.

Necrotic Geist synergizes well with Houndmaster Shaw, since the created Ghouls will all have rush. If you have any other minions on the board, this combo can let you clear the opponent's board, since every Ghoul that dies generates a new Ghoul with rush.

It's worth noting that if on average the remaining cards in a player's deck are more valuable than the 2/2 Ghouls summoned, one might prefer to use Cult Master in place of this minion for a less immediate but more impactful effect.

Summon
You like?
Effect triggering
Get up!
Attack
Yesss!