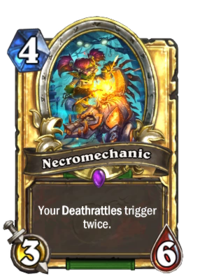 If at first you don't succeed, die, die again.

Necromechanic is a epic hunter minion card, from The Boomsday Project set.