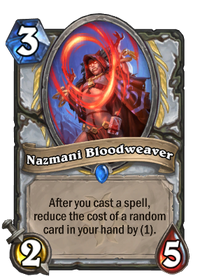 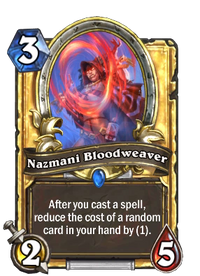 After you cast a spell, reduce the cost of a random card in your hand by (1).

Her first stage name, Ketchupweaver, failed to excite the audience.

Nazmani Bloodweaver is a rare priest minion card, from the Madness at the Darkmoon Faire set.

Nazmani Bloodweaver's effect is most powerful when multiple triggers can be activated. It can be used in combination with cards like Palm Reading to dramatically reduce the cost of cards in hand, potentially enabling powerful combos.

Summon
We will feed on this world.
Attack
Blood for G'huun!

The Nazmani tribe is a tribe of blood trolls inhabiting Zul'Nazman in Nazmir.

The Alliance also dealt with them. They seemed to be originally friendly and open to trade and fight against the Horde. Captain Conrad established a trust with the tribe, having been believed to be a messenger of G'huun.

It was formerly a Zandalari tribe.