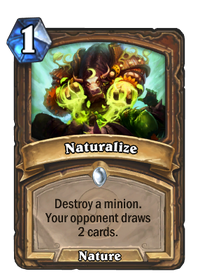 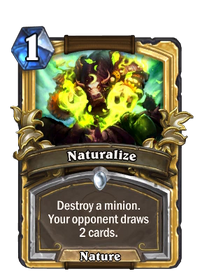 Another one bites the dust.

Naturalize is a common druid spell card, inducted into the Hall of Fame set, formerly from the Classic set.

Naturalize can be obtained through crafting only.

Unconditional removal is incredibly powerful, and for 1 mana is even more powerful. However, card draw is a very strong advantage to grant to the opponent. Due to the fact that Naturalize gives your opponent two cards, players will only want to use this on severe threats. Minions that the opponent has invested several spell enchantments on or core legendary cards such as Ysera are great targets.

Naturalize is a good addition to mill decks that try to make the opponent overdraw, using cards such as Coldlight Oracle, King Mukla and Dancing Swords, turning the spell's usually problematic card draw effect to the druid's advantage.

Despite its low cost, it can be effective in the late game. If your opponent has board advantage, and has expended their deck, this could cause 3+ Fatigue damage to their hero as well. 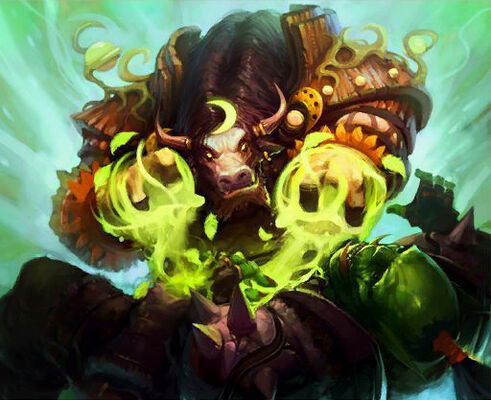 Commentary: Druids have always had excellent flexibility and a number of different tools when it comes to generating mana, cards, and minions, but have long struggled to remove their opponent's large minions. Naturalize effectively nullifies that weakness, giving Druids a powerful option in matchups where card advantage doesn’t matter. Moving it into the Hall of Fame enforces the Druid's weakness in removing large minions, maintaining its class identity.