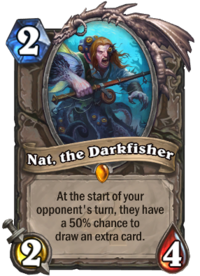 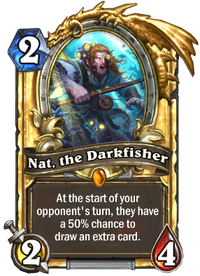 At the start of your opponent's turn, they have a 50% chance to draw an extra card.

For the minion card from the Classic set, see Nat Pagle.

Nat, the Darkfisher is a legendary neutral minion card, from the Whispers of the Old Gods set.

Nat, the Darkfisher can be obtained through Whispers of the Old Gods card packs, or through crafting.

One use for this card would be in a mill deck, accelerating the exhaustion of the opponent's deck. It could also be effective against control decks that already have nearly full hands, potentially burning a card at the start of the opponent's turn. However, the importance of overdrawing cards is generally overestimated, except in very long games, since most matches end long before either player's deck has been exhausted.

These possibilities aside, this card's effect is strongly undesirable, especially if it is allowed to remain on the board. The tradeoff for this are its 2/4 stats, providing good value for only 2 mana, and allowing for efficient trades during the early game. However, any card advantage gained through the card's stats is immediately lost through the activation of its effect.

Bear in mind that this card's effect only has a 50% chance of activation each time. This makes it less reliable as a means of milling the opponent, but also somewhat less terrible in other cases. If you come into control of this minion through a random effect, it is generally a good idea to destroy it as soon as possible.

This is the corrupted version of Nat Pagle. 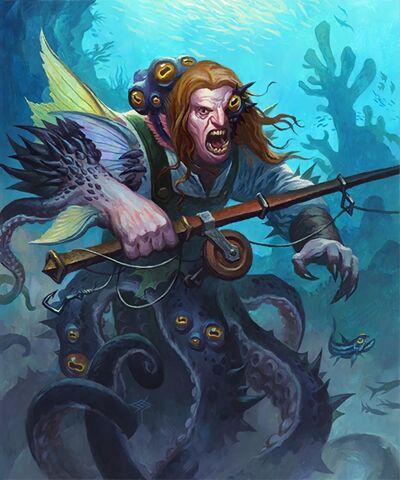