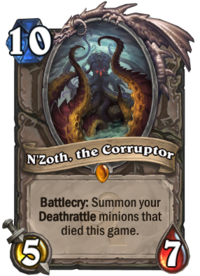 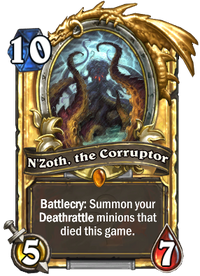 Battlecry: Summon your Deathrattle minions that died this game.

Has not been able to get "Under the Sea" out of his head for like FIVE THOUSAND YEARS.

For other versions of this card, see N'Zoth (disambiguation).

N'Zoth, the Corruptor is a legendary neutral minion card from the Whispers of the Old Gods set.

N'Zoth, the Corruptor can be obtained through Whispers of the Old Gods card packs, or through crafting.

With many Deathrattle minions to choose from, minions for N'Zoth are very open-ended. Generally powerful Deathrattle minions like Sylvanas Windrunner and Tirion Fordring are strong candidates, as are card generators like Weaponized Piñata and Pyros, minion-destroying Deathrattles like Obsidian Statue, and minion-summoning Deathrattles like Sneed's Old Shredder and Hadronox. Even unconventional options like Feugen/Stalagg and Dr. Morrigan can be used to your advantage. You should also preferably include a few Deathrattle minions with Taunt to make N'Zoth easier to play when you're behind or as a defensive play. Good candidates for this case include Sludge Belcher, Khartut Defender, Direhorn Hatchling, Voidlord, and Lucentbark.

N'Zoth's Battlecry is tricky to work around, as even Silencing the Deathrattle minions will not prevent them from being resurrected. If you suspect that your opponent is preparing to play N'Zoth, you can avoid destroying powerful Deathrattle minions while they are on the enemy side of the board by using mind control effects to take control of them, or using effects that remove the minions from play without destroying them, such as Entomb, Polymorph and Hex.

A board clear such as Brawl and Twisting Nether can help in answering N'Zoth and the minions he summons, although you will still have to deal with their Deathrattle effects afterwards (unless you're a Priest with Plague of Death). If you know your opponent is likely to play N'Zoth, avoid using board clears until he is used.

As with any minion with a strong Battlecry, a possible counter is Dirty Rat, which can force an enemy N'Zoth onto the battlefield without activating its Battlecry.

Summon
I taste the essence of your soul.

N'Zoth is notable as the one Old God which has not previously been revealed in any form in World of Warcraft or other media. Little is therefore known of the form, powers and details of N'Zoth.

While the character is long established in Warcraft lore, this is the first time it has been depicted, revealed or even described in detail, making it in a sense original to Hearthstone.[7][8] Its full art was intentionally revealed to players in advance of the card itself, providing a first ever glimpse of the elusive horror.[7]

The Hearthstone team collaborated "a lot" with the Warcraft lore developers when conceiving N'Zoth,[9] and the artist for the card, Tyson Murphy, is lead character artist for World of Warcraft. While the card itself is part of the game of Hearthstone, the art for N'Zoth is intended to be canonical.[10]

One of N'Zoth's tentacles features as a separate minion: Tentacle of N'Zoth.

N'Zoth the Corruptor is the Old God of Madness an Old God who is likely imprisoned beneath Azeroth's oceans, and is responsible for the spark of the Emerald Nightmare corrupting the Emerald Dream. Due to its oceanic nature, it is possible that it is the Old God which turned night elves into naga, corruption of Neltharion into Deathwing and it likely makes several indirect appearances in the quest-chains of the Vashj'ir zone. In ages past, N'Zoth engaged in a long war with C'Thun and Yogg-Saron, with Warlord Zon'ozz leading N'Zoth's army. During the events of World of Warcraft: Cataclysm, N'Zoth was a driving force behind the actions of Deathwing.

Very little is certain about N’Zoth (pronounced nuh-ZAH-th or /nə'zɑθ/)—most beings on Azeroth don’t even know its name, much less what it looks like. Scraps of obscure lore claim that the Old God has been imprisoned beneath the darkest depths of the ocean for millennia beyond counting. There are also whispers that N’Zoth desires nothing more than to twist what was once noble and pure to its own inscrutable ends. Ultimately, most of what is “known” about this most insidious of beings is mere speculation.

Still, looking at the evidence, it seems like N’Zoth feels a compulsive need to redecorate, and has the aesthetic sensibilities of someone that’s super into skulls, black leather, and knee high platform boots. Emerald Dream? How about Emerald Nightmare. Neltharion the Earth Warder? Nah, let’s go with DEATHWING THE DESTROYER! Prissy Night Elf nobility throwing a hissy fit? BAM! You get a snake body and actual hissing! Yes, it’s rumored that N’Zoth was involved with twisting the Emerald Dream, corrupting one of Azeroth’s most powerful dragons, and mutating the Highborne into the despicable Naga . . . but it’s just getting started.[11]

N'Zoth "embraces chaos", as reflected by the randomness of his Battlecry effect.[1] Despite some confusion from other sources, in Hearthstone lore, while Yogg-Saron "opened the door when it corrupted Vordrassil", it was "not the only Old God at work in the Emerald Dream".[12] 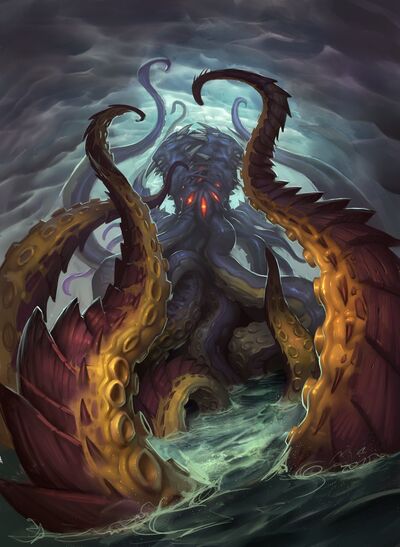