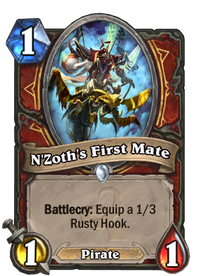 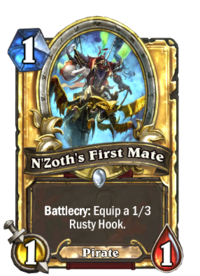 Hates when N'Zoth yells "Ahoy Matey!!", but there's not really much he can do about it.

N'Zoth's First Mate is a common warrior minion card, from the Whispers of the Old Gods set.

N'Zoth's First Mate can be obtained through Whispers of the Old Gods card packs, or through crafting. 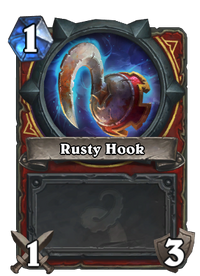 This minion is best played within the first few turns to provide a decent early weapon. Combinations with cards such as Upgrade! and Bloodsail Cultist will efficiently make it a more powerful weapon.

It is also used by Warriors to summon Patches the Pirate on turn 1; allowing for an explosive start of 2/2 worth of stats and a weapon to push early tempo.

This Pirate appears to be a qiraji, an insectoid race created millenia ago by the Old God C'Thun. However, it is also clearly flying the skull and crossbones, along with a crossed swords insignia on its mount's saddle, and has a hook for a right hand. This minion's professed close relationship to N'Zoth, the Corruptor (N'Zoth's "First Mate") is also new, suggesting N'Zoth to hold a position of Captain on board a pirate vessel of some kind, but is likely not intended to be taken too literally. N'Zoth is speculated to be imprisoned beneath Azeroth's oceans, which may account for the watery theme of this Pirate minion.

As an Old God-related pirate insectoid, this minion is distinctly original to Hearthstone. A qiraji following N'Zoth is also new, since the two Old Gods were traditionally enemies. However, with their master's death, the servants of C'Thun are ready to rally behind any remaining Old God.[1] 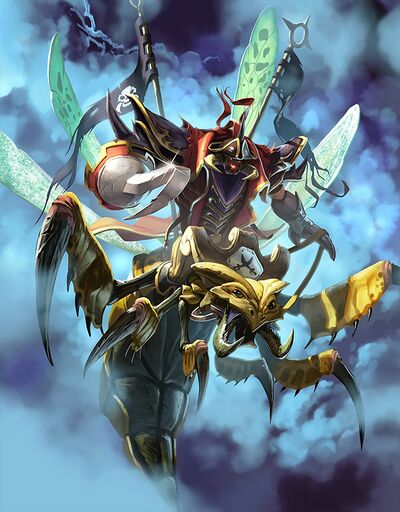