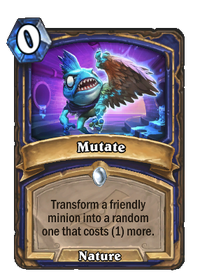 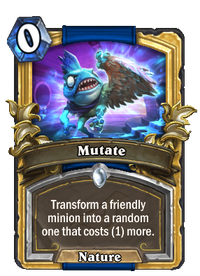 Transform a friendly minion into a random one that costs (1) more.

You'll get the transformation you want when murlocs fly.

Mutate is a common shaman spell card, from the Rise of Shadows set.

Mutate can be obtained through Rise of Shadows card packs, through crafting, or as an Arena reward.

Being a free spell, Mutate can also function in a deck based on Spirit of the Frog or Gadgetzan Auctioneer.