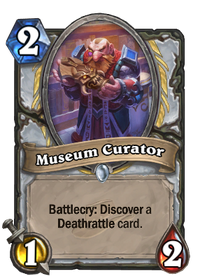 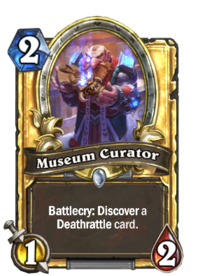 He is forever cursing the kids who climb on the rails and the evil archeologists who animate the exhibits.

Museum Curator is a common priest minion card, from the League of Explorers set.

Two copies of regular Museum Curator are obtained by defeating The Steel Sentinel, the second boss in The League of Explorers's fourth wing, the Hall of Explorers.

As a Wild format card, both regular and golden versions of Museum Curator can also be crafted for the following amounts:

Museum Curator fills a gap as a much needed 2 mana drop for Priests that doesn't require other circumstances to fully utilize. Both useful as an early game drop and a late game, cheap card draw, its Discover a Deathrattle effect has a very good chance to draw a valuable card such as Dark Cultist, Sludge Belcher, Piloted Shredder or even Sylvanas Windrunner. Note that the ability is limited to Priest and neutral cards; Museum Curator will not be able to draw a Deathrattle card from another class.

Summon
Welcome to the exhibit!