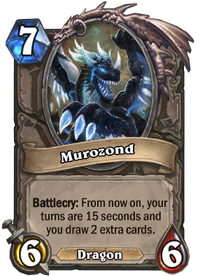 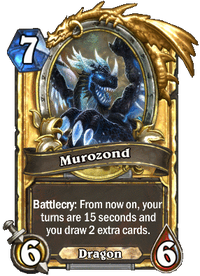 Battlecry: From now on, your turns are 15 seconds and you draw 2 extra cards.

For the Descent of Dragons minion, see Murozond the Infinite.

Murozond is a neutral minion card, from the Arena unique set.

Murozond is unique to the Arena, only available to The Taverns of Time event and can only be obtained via drafting it during an Arena game.

Murozond is uncraftable and cannot be crafted or be obtained from card packs.

Murozond is a corrupted future version of Nozdormu, found in End Time, a bleak alternate future in which Deathwing succeeded in destroying Azeroth.

Murozond is a future counterpart of Aspect of Time, Nozdormu, leader of the Infinite dragonflight. Using the Hourglass of Time, he managed to interfere with his past counterpart's efforts to send heroes to the past, which would result in a change of the bleak future, in which the maddened wyrm made his lair.

The master of the Infinite dragonflight tasked Aeonus to oversee the disruption of key moments in the true timeway. 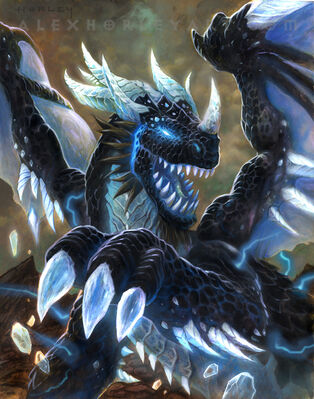