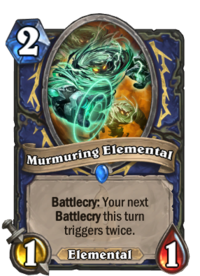 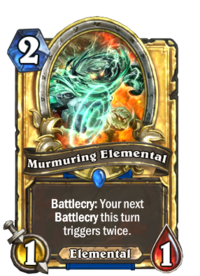 Battlecry: Your next Battlecry this turn triggers twice.

Murmuring Elemental is a rare shaman minion card, from the Kobolds and Catacombs set.

Murmuring Elemental can be obtained through Kobolds & Catacombs card packs bought through the ingame Shop, purchased online from the Battle.net shop, or through crafting.

This minion is like a weaker Brann Bronzebeard, but with a slightly lower Mana cost. Nevertheless, double Battlecry is a very powerful effect, and many Elemental Shaman decks run minions with strong Battlecries like Kalimos, Primal Lord, Blazecaller, and Stone Sentinel. The fact that it's an Elemental also helps for synergy purposes. Alternatively, it also works well in a Jade Shaman deck, since most of the Jade Golem summoning cards use a Battlecry.

The name of this minion may be a reference to Murmur.

Murmur is the fourth and final boss of Shadow Labyrinth, an instance wing of Auchindoun.

Murmur is an incredibly powerful elemental born when the Universe was created, about whom little is known. The Shadow Council inhabiting the Shadow Labyrinth summoned it for their nefarious purposes, but seem to be having trouble keeping him under control. Its history is briefly documented in the Codex of Blood, which reveals Murmur is the primordial essence of sound. He is referred to as the extra-planar being.