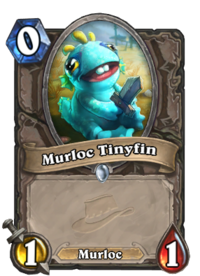 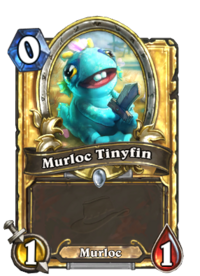 High mortality rate, from often being hugged to death.

Murloc Tinyfin is a common neutral minion card, from the League of Explorers set.

Two copies of regular Murloc Tinyfin are obtained by defeating Giantfin, the second boss in The League of Explorers's the third wing, The Ruined City.

As a Wild format card, both regular and golden versions of Murloc Tinyfin can also be crafted for the following amounts:

Almost always directly superior to Wisp, this minion offers synergy with Murloc decks. Its value lies in its low cost, which when combined with effects such as Murloc Warleader and Grimscale Oracle to buff its stats can provide a substantial minion for 0 mana.

This card lets you play Everyfin is Awesome for 1 less mana (potentially one turn earlier), becoming a 3/3 for 0 mana in the process. This can give your board great value if played in ideal conditions (if you have at least 2 or 3 Murlocs on the board beforehand).

Murloc Tinyfin is a baby murloc. While the title 'Tinyfin' is original to Hearthstone, the art and card stats are taken from the TCG, where it is known simply as "Baby Murloc".

Baby murlocs are less hostile than the adults, and some are even collected by other races as pets and companions. Baby murlocs are usually kept close to the adults, but can sometimes be found inside large clams, such as those off the east coast of Durotar or in the Narsong Trench in Krasarang Wilds.

Infant murlocs have a large buck tooth, and also possess a small tail. The latter is a feature adults lose, giving birth to the speculation that murloc larvae are purely aquatic, but as the individual grows their water-adapted features gradually disappear, making them more capable of living on land. Baby murlocs are prone to high pitched infantile babbling and gurgling, often in a sing-song style, and have also been known to dance. 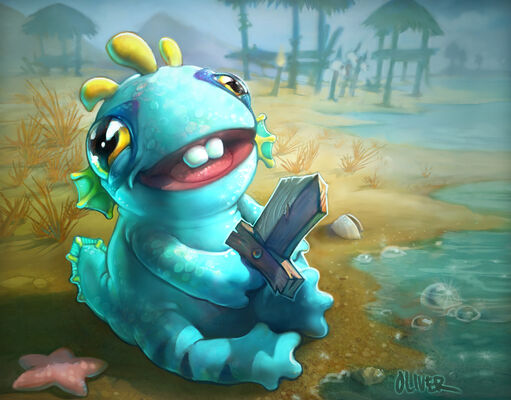