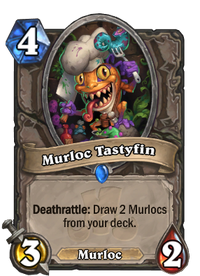 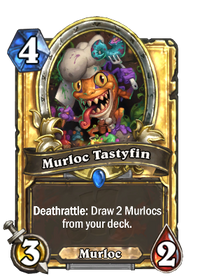 Deathrattle: Draw 2 Murlocs from your deck.

He was destined for the soup. One way or another…

Murloc Tastyfin is a rare neutral minion card, from the Rastakhan's Rumble set.

Murloc Tastyfin can be obtained through Rastakhan's Rumble card packs, or through crafting.

This card's low tempo and delayed effect makes it very weak as a tempo play, making it problematic in the early game, which Murloc decks capitalize on. This card is best saved when when you are running out of resources. When combined with Scargil or Tip the Scales, however, tempo loss no longer becomes an issue.

It can be used to pull Coldlight Oracles from your deck, giving it some utility in Mill decks.