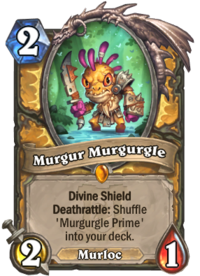 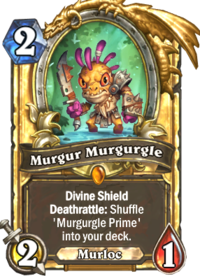 Murlocs are not native to Outland. When the Sungills arrived, one among them rose to the challenge of this dark world. They call him... Murgurgle. Murgur Murgurgle.

Murgur Murgurgle is a legendary paladin minion card, from the Ashes of Outland set.

Murgur Murgurgle can be obtained through Ashes of Outland card packs, through crafting, or as an Arena reward. 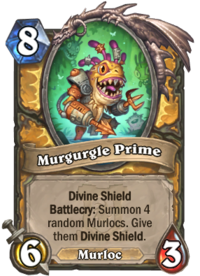 As a well-statted Murloc, Murgur Murgurgle is a great card for Murloc Paladin. However, its generically great stats and no reliance on other murlocs make it a good fit for any Midrange Paladin or possibly some control builds. It's a perfect card for Highlander Paladin and No Neutral Paladin as well.

The Sungill tribe of Murlocs were originally from the shores of what is now known as the Blasted Lands.
Things went poorly for them when the Dark Portal opened.
Later, things went even worse. A troll by the name of Witch Doctor Tor'gash abducted their entire clutch of eggs.
The whole tribe was furious, and tracked him all the way to Outland to rescue them.
Luckily, they found them; they had hatched, and released in Zangarmash[sic]!
However, the Sungills were now far from home, in an unknown land.
Not knowing how to get back, they decided instead to settle there, and made a new home.
Unfortunately, the twists of fate were not done with the Sungill tribe.
Most of them became corrupted by fel energies, and split off to became the Felfin tribe.
Soon, war broke out between the Sungill and the Felfin.
The Sungill fought hard, but the Felfin were winning.
They had the Sungill under siege, trapped in the peninsula where their village was located.
The Sungill Chieftain was paralyzed with indecision – fight their way out, killing many of their previous brethren? Or stay and die as the Felfin closed in?
One particularly hardy tidehunter of the Sungill, survivor of numerous skirmishes with the Felfin, saw what needed to be done.
He staged a coup, deposing the previous Chieftain by force, and led his remaining people on a daring attack to burst through the Felfin lines, and escape to the open lands of Outland.
For this, his people thanked him. He did not want to be a Chieftain, but his people insisted he stay on as a military leader at least, and gave him the title of Murgur.
When he later fell to the Rusted Legion, Mecha-Jaraxxus took note; he was the fiercest murloc he had ever seen. And so, Mecha-Jaraxxus rebuilt him, as Murgurgle Prime.[1]

The peninsula in which the Sungills' village was located is likely to be Hellfire Peninsula.