For the 2017 mini-series, see Hearthstone: Mulligans. 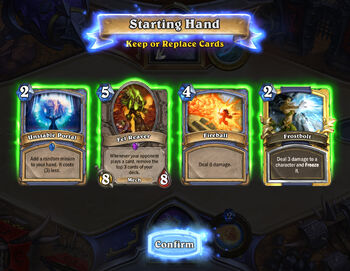 The mulligan, or card selection stage, is a stage at the start of each match in which both players have the ability to replace cards in their starting hand with random ones from their deck.

The mulligan takes place following the introduction of each player, with the announcement of their hero names.

The mulligan stage begins with each player being given a random selection of cards, 3 cards for the player going first and 4 cards for the player going second. Both players have 65 seconds to mark as many cards as they like to be replaced with new cards from their deck. Note that such cards which are mulliganed away are not added back into the pool for possible replacements.[1] If only one copy of the card is in the deck, it is impossible to draw it as a replacement.

During the mulligan, the player is able to see the opponent's name and class in the top-left corner to assist them with their mulligan choices. Once both players have finalized their selections and clicked the redraw button, or the 65 seconds has elapsed, all marked cards will be replaced with new ones for both players, and their new starting hands will be shown to them. After both players finish the mulligan, a trained eye or a deck tracker can spot the number and position of cards which were mulliganed away from the opponent's hand.

Afterwards, the second player is also given The Coin as compensation for going second, and then the first turn begins.

The mulligan is a tactically significant stage, with each player attempting to draw the best possible cards for their starting hand based upon not only their own deck, but also the class and player against which they have been matched. A strong mulligan can make a significant contribution to a player's likelihood of winning the match.

The mulligan is the only way players have to look for desired cards for their starting hands, and as such is very important to starting the game well and creating the greatest chance of success.

Generally, low-cost drops playable in the early game are preferred, while expensive cards that will be unplayable for many turns are replaced in favor of more options in the beginning. However, a particularly good card may justify the risk of running out of options in the first few turns. Sometimes an expensive card critical to a deck's win condition may be kept simply to ensure it does not end up at the bottom of the deck.

Before the release of One Night in Karazhan, it was possible to observe the number of cards mulliganed by the opponent before confirming one's own selection. This allowed some assessment of the opponent's starting hand and an appropriate response. For instance, if the opponent replaced one or zero cards, they may have an excellent starting hand, so spells useful against 2- and 3- drops might be kept. On the other hand, if the opponent replaced their entire hand, anti-early-game spells might be mulliganed in favor of drops that are independently good.

The animation of the opponent's redrawing was only shown if the opponent actually confirmed selection before the player did. Therefore, to avoid revealing any information to the opponent, sometimes players would engage in mulligan "standoffs" where both waited until the last possible moment to confirm their mulligans. Players and developers discussed changing the system to prevent these long waits, but for a time it was not considered a high priority issue since it typically only occurred in high level competitive play.[7] However, the change was made in Karazhan to show mulligan animations simultaneously, thus removing any reason to delay confirming the mulligan, and preventing any more standoffs.