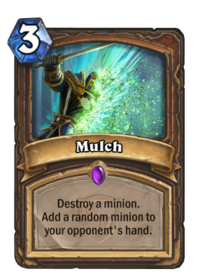 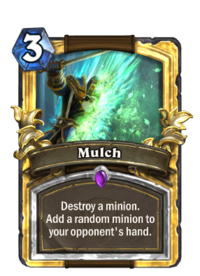 Destroy a minion.
Add a random minion to your opponent's hand.

Is this a noun or a verb? We will never know.

Mulch is an epic druid spell card, from the Grand Tournament set.

Mulch can be obtained through The Grand Tournament card packs, or through crafting.

If your opponent already has a full hand, they will not be able to gain the generated minion, and Mulch becomes a very efficient targeted removal. This is also useful if the opponent already has 9 cards in their hand; if Mulch generates a minion card for them, filling their hand, at the start of their next turn they will overdraw, burning the top card of their deck instead of drawing it. This may be more effective than denying them the generated minion, since the minion has no guaranteed synergy with the rest of their deck.

Mulch can also be used in a Mill deck, as it gives the opponent another card in their hand.

This spell appears to depict the druid making rather forceful use of their nature magic to turn the target to mulch. 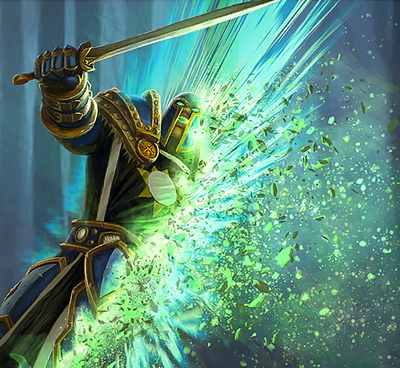