Mukla, Tyrant of the Vale

From Hearthstone Wiki
Jump to: navigation, search
Mukla, Tyrant of the Vale
Regular 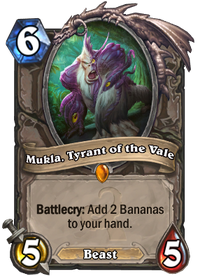 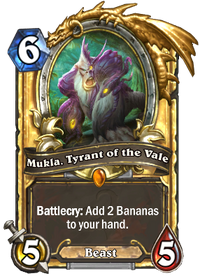 Battlecry: Add 2 Bananas to your hand.

Pro tip: DO NOT BOGART THE BANANAS.

Mukla, Tyrant of the Vale is a legendary neutral minion card, from the Whispers of the Old Gods set.

Mukla, Tyrant of the Vale can be obtained through Whispers of the Old Gods card packs, or through crafting. 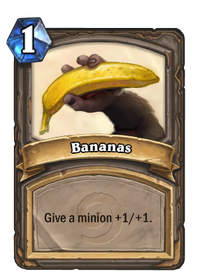 This minion could be useful in a Beast-synergy deck, with the Bananas useful for efficient trading, ideally with minions already on the board for the element of surprise.

You can use the 2 bananas to buff 2 minions for +1/+1 or one minion for +2/+2. Although, this is only 7/7 total in stats for 8 mana, if not in combination with cards like Brann Bronzebeard, which would give Mukla 9/9 in stats.

It also works pretty well with minions that synergize with these buffs, such as Fjola Lightbane, Eydis Darkbane, Dragonkin Sorcerer or Djinni of Zephyrs. It could also work in a deck that relies on spells in general with cards like Gadgetzan Auctioneer.

Since the Bananas count as spells not starting in your deck, Mukla also has synergy with Open the Waygate.

This is the corrupted version of King Mukla.