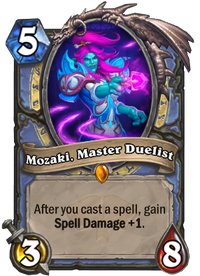 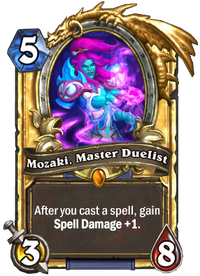 After you cast a spell, gain Spell Damage +1.

Treats her students like her peers, which means defeating them in one-sided duels all day long.

Mozaki, Master Duelist can be obtained through Scholomance Academy card packs, through crafting, or as an Arena reward.

Mozaki is best used in combination with cheap spells, preferably ones that generate more spells, such as Ray of Frost and Magic Trick. When cast early on, Incanter's Flow can also help with making spells cheaper, letting Mozaki ramp even faster. That strategy is especially effective when used with Sorcerer's Apprentice, allowing large combos that ramp up the Spell Damage, finishing it with direct face damage with spells such as Frostbolt. In such situations, she can be a threat comparable to a cheaper Malygos, with the possibility of ramping up even past it. She can be even more dangerous when paired with Ras Frostwhisper.

In situations where a combo doesn't line up, she can sometimes be played from behind, as she has high health for a 5-drop, and the lingering threat she presents if left on the board means your opponent might prioritize removing her, which might buy you some time at the cost of a possible win condition.

Summon
Who's ready for a little sho'down?
Attack
Top of me class!

Mozaki is a troll mage and is unique to Hearthstone. She appears to be wearing the Frostfire Regalia, one of the first armor sets for mages during classic World of Warcraft.