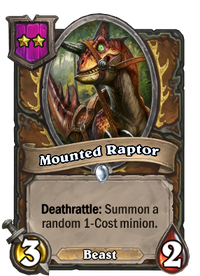 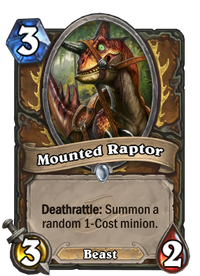 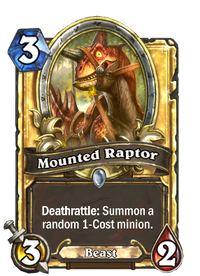 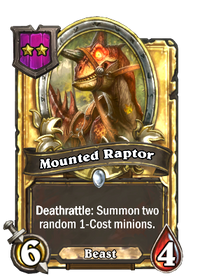 Mounted Raptor was a Tier 2 minion in the Battlegrounds game mode.

It was essentially a smaller beast version of Piloted Shredder and the even larger Piloted Sky Golem, Mounted Raptor was wholly unremarkable even for beast and deathrattle strategies.

It was effective in the early rounds, but it had no business remaining in your comp toward the mid game, since several of the possible minions it drops were effectively vanilla 1/1s that not only contribute next to nothing in combat toward the mid-game, but also took up space that more relevant death-rattles may need. So committing buffs into a mounted raptor was usually going to cost you the game since it was vital to transition away from the raptor at some point.

It could be fitted into a beast comp to feed Scavenging Hyena initially, since there was a small chance that it may drop an additional beast to feed the Hyena with, however even there it was nearly outclassed (save only for the larger natural body) by Kindly Grandmother and even more so by Rat Pack, since they consistently contributed considerably more for the strategy than Mounted Raptor. To add insult to injury, these minions were in the same tavern tier.