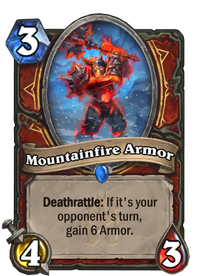 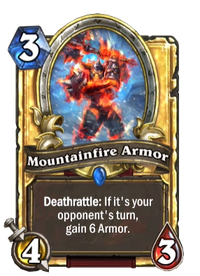 Deathrattle: If it's your opponent's turn, gain 6 Armor.

Excuse me. Your mountain is on fire.

Mountainfire Armor is a rare warrior minion card, from the Knights of the Frozen Throne set.

Mountainfire Armor can be obtained through Knights of the Frozen Throne card packs, or through crafting.

Mountainfire Armor is the first card to be seen that has a Deathrattle effect that only triggers on an opponent's turn. This effect unfortunately greatly hurts the strength of the card against Aggro decks that will often simply ignore the minion. Mountainfire Armor can be a solid card for Control Warrior decks, as it helps fill the early-game curve whilst also potentially providing Armor to help towards the goal of late-game survival.

Mountainfire Armor is an average card in Arena, as Health and Armor gain are often worth very little value in Arena, which results in the card being an average 3-Mana minion with 4/3 stats.

Mountainfire Armor is unique to Hearthstone. It represents the spirit of a fallen "Blood" warrior that has possessed his own armor.[1]