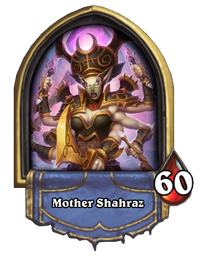 A master of the blade. And the other blade. And like... two more blades.

For the boss in Trial by Felfire Story, see Mother Shahraz.

Mother Shahraz is a boss encounter found in the Trial by Felfire challenges. It is the first boss of The Slithery and the Surly and the sixth boss of the challenges.

The best class to use is Mage because his hero power allows to counter Mother Shahraz's ability by ignoring the damage, and the best strategy is to focus on freezing Mother Shahraz and her minions.

I'm hoping for a real challenge this time.
Here for a sparring match, Demon Hunter? (vs. a demon hunter hero)

Ha! Nice try!
That was a mistake.
You'll have to do better.
I'm not impressed.

Stop toying with me, my swords itch.
Are we having fun? I'm not so sure.
You seem a little tense. Relax, it's all in good fun.

Mother Shahraz is a shivarra boss located in the Den of Mortal Delights in the Black Temple. Besides requiring high amounts of Shadow Resistance, the fight is rather basic tank and spank. All previous bosses (Shade of Akama, Teron Gorefiend, Reliquary of Souls, and Gurtogg Bloodboil) need to be killed before the door to Mother Shahraz opens. She must be killed before the raid can gain access to the Illidari Council.