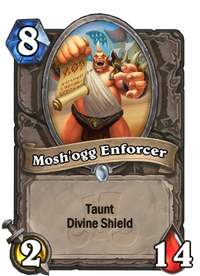 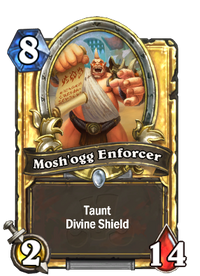 Can’t break the rules if you can’t read ‘em.

Mosh'ogg Enforcer is a common neutral minion card, from the Rastakhan's Rumble set.

Mosh'ogg Enforcer can be obtained through Rastakhan's Rumble card packs, or through crafting.

Mosh'ogg Enforcer is a large minion with stats in the extremes. It has an enormous amount of Health with Divine Shield to boot, but its Attack is abysmal. Because it has 2 Attack, it fares poorly against Priests, especially if they run Cabal Shadow Priest.

Having such a low Attack is not all downsides, however. For example, it can be recruited with Master Oakheart, which where it does a good job at protecting other minions. It can also be resummoned with Hadronox. Priests can take advantage of its extremely high Health with cards like Inner Fire and Lady in White.

In Arena, this card's effectiveness is limited in an aggresive deck, but considered to be strong in a control-based deck.

The Mosh'Ogg tribe of ogres live in the jungles of Stranglethorn Vale. They are rumored to be in possession of a powerful stone that may be of use to the Horde.