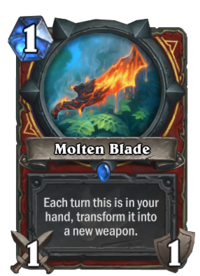 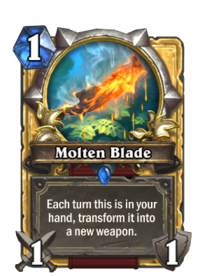 Each turn this is in your hand, transform it into a new weapon.

Molten Blade is a rare warrior weapon card, from the Journey to Un'Goro set.

Molten Blade can be obtained through Journey to Un'Goro card packs, or through crafting.

This weapon's in-hand effect is very similar to that of Shifter Zerus, but for weapons instead of minions. See that page for additional notes on this type of effect.

In Arena, picking Molten Blade can be a good choice if offered late in a draft that is lacking sufficient weapons.

A Molten Blade transformed into Twig of the World Tree can be a strong play if the deck has other weapons with which to replace it, triggering its Deathrattle and gaining 10 Mana Crystals as early as turn 5.