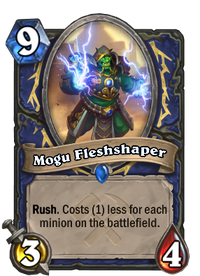 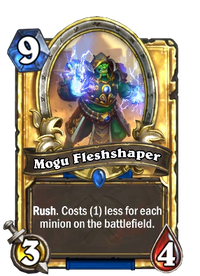 Rush. Costs (1) less for each minion on the battlefield.

Mogu Fleshshaper is a rare shaman minion card, from the Saviors of Uldum set.

This minion is comparable to Sea Giant only instead of a huge body it's a decently sized minion with Rush. This card can be included in any aggressive zoo-type decks for the same reasons. It's also a great target for Evolve-like effects like Mutate and Witchy Lackey.

Summon
Mortals are so squishy.
Attack
Bend to my will!

Flesh-shaping is an extremely painful process which is used on living animals. It "stretches" skin, bone and flesh on animals, forming it into new shapes, while they're alive and screaming loudly. Mastering this power requires decades of study. The Engine of Nalak'sha was the source of the mogu's flesh-shaping power. In the Halls of Flesh-Shaping lies the mysterious substance responsible for all mogu flesh-shaping experiments.

Flesh-shaping was the method used by the ancient mogu to create several of their servitor races, including the grummles and saurok.