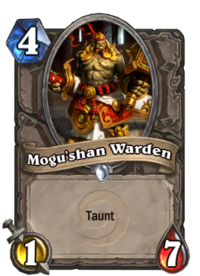 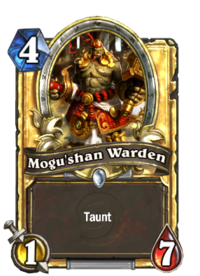 All these guys ever do is talk about the Thunder King. BOOOORRRINNG!

Mogu'shan Warden is a common neutral minion card, from the Classic set.

Mogu'shan Warden can be obtained through Classic card packs, through crafting, or as an Arena reward.

This 1/7 with Taunt for only 4 mana can become hard to deal with. Any class that can buff its minions will have a strong taunt after buffing him. Works especially well in a priest deck; combo him with buffs such as Power Word: Shield and Divine Spirit to gain a very strong defender, who with regular healing from Lesser Heal can be kept alive for some time. Mogu'shan Warden's high Health also makes it one of the best targets for Inner Fire and especially Divine Spirit combos. Even without buffs such as Divine Spirit, Inner Fire will produce a 7/7 taunt for only 5 mana.

The Warden's trade-off is its low Attack. This is of greatest significance against higher-Health minions, while its 1 Attack allows it to trade very efficiently against low-Health minions such as murlocs. This also makes it vulnerable to destruction by cards such as Stampeding Kodo and Shadow Word: Pain, regardless of its remaining Health.

Summon
Pandaria will be ours!

The mogu are a powerful magical race who live in Pandaria. Proud, hateful, and powerful both physically and magically, the mogu are the foremost enemies of the pandaren. The mogu and pandaren have fought over the future of Pandaria since time immemorial.

Though created by the Titans during the creation of Azeroth to serve and protect the land, they were later afflicted by the Curse of Flesh, eventually losing their way and valuing power and control above all else. Under the reign of emperors like Lei Shen, the Mogu Empire dominated Pandaria. After the Pandaren revolution and the downfall of the empire, the mogu clans scattered.

Following the arrival of the Alliance and the Horde, the mogu clans made various attacks to reclaim their former glory from the pandaren in the ensuring chaos. Shan Bu and Zhao-Jin the Bloodletter in particular led their clans against the pandaren-controlled Vale of Eternal Blossoms and Townlong Steppes. After the fall of the newly resurrected Thunder King, the mogu have once again been defeated. 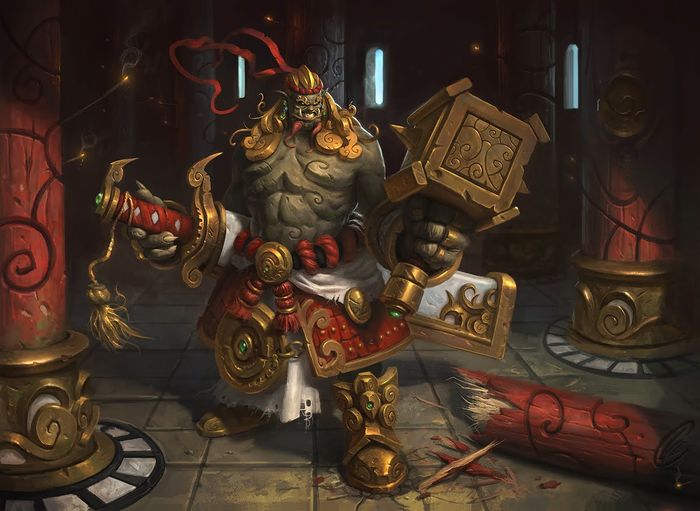