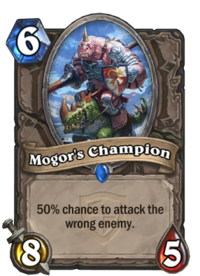 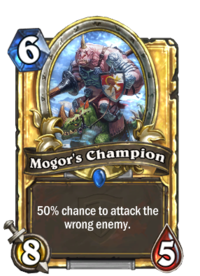 This champion has learned from the best. Except for his target selection.

Mogor's Champion is a rare neutral minion card, from the Grand Tournament set.

Mogor's Champion can be obtained through The Grand Tournament card packs, or through crafting.

Attack with Mogor's Champion first before committing to any plan; a miss can derail kill combos. Alternatively, remove opponent minions using your other minions and spells to ensure that there are only enemies left that you want to hit (but beware that the miss can target your opponent's face just as well as any minion). Buff it with Taunt to take advantage of its high base stats.

You can Silence the Champion to nullify its effect and guarantee that you will hit your target. This act is jokingly called 'curing ogre of stupidity'. This is similar to silencing Ancient Watcher. Ogre Ninja is cheaper, has more Health and even has Stealth. While it has a lower Attack value, a Forgetful minion's attack may be wasted on a weak opposing minion anyway.

Mogor's Champion is ultimately a very poor card - its stats for its cost are considerably worse than Boulderfist Ogre even before you factor in its drawback, while being a high Attack/high cost minion makes its Forgetful drawback even more punishing than it is on smaller minions like Ogre Brute, as a missed hit wastes even more resource, and its low Health for its cost is particularly crippling. Mogor's Champion is generally considered one of the worst cards in The Grand Tournament.

This can be useful for removing minions that are protected behind another Taunt minion or that have stealth, or even for dealing lethal damage to the opponent themselves. For example, with only 1 Taunt minion on the field, attacking the Taunt using the Champion will have a 50% chance of bypassing the Taunt and striking the enemy hero. In close games this chance at extra damage can allow players to close the gap.

Because of this possibility, when seeking to prevent an opponent with card such as Mogor's Champion from hitting your hero while behind a taunt, it is effective to summon as many minions onto the field as possible. Each acts to decrease the likelihood of an attack reaching your hero should the minion miss its intended target.

This minion is a champion of Mogor the Ogre. He is riding on a Stegodon. 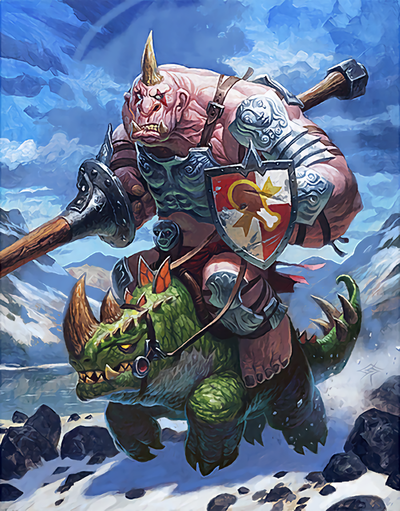