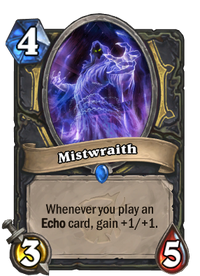 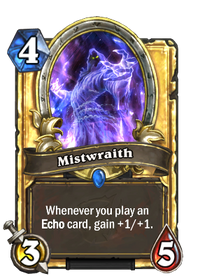 One little Mistwraith sitting in a tree. M-I-S-T-I-N-G.

Mistwraith is a rare rogue minion card, from the The Witchwood set.

Mistwraith can be obtained through The Witchwood card packs, or through crafting.

Mistwraith is similar to Violet Teacher, however it's effect is more constrained than Questing Adventurer. The better statline allows the player to play him on earlier turns to grow later, but is not so versatile in when he can be grown.

Mistwraith's effect does trigger when Minions affected by Glinda Crowskin are played.

Summon
You will be mist.
Attack
Lost.