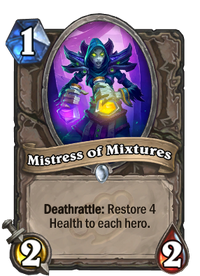 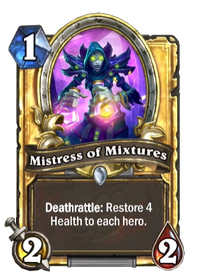 Deathrattle: Restore 4 Health to each hero.

Her favorite mixture is cola and lime.

Mistress of Mixtures is a common neutral minion card, from the Mean Streets of Gadgetzan set.

Mistress of Mixtures can be obtained through Mean Streets of Gadgetzan card packs, or through crafting.

Besides having strong stats for its cost of one mana crystal, it also restores 4 Health to both players upon dying. The latter is very useful for classes that always take damage early in the game, such as Warlock and Rogue.

If combined with Embrace the Shadow or Auchenai Soulpriest, it will become a better Shadowbomber.

Summon
Side effects? No... trust me.
Attack
This might sting.