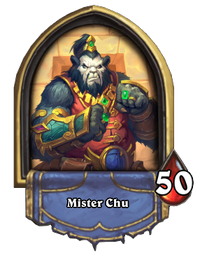 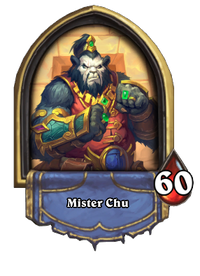 Not to be confused with Mr. Chu.

Mister Chu is a boss that can be encountered intially in Chapter 3 of Tombs of Terror. After completing Chapter 3, this boss encounter will be available in any completed chapter. 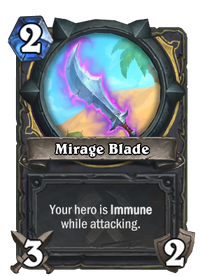 Mister Chu
I am in your way.
Reno Jackson
You are looting all of my loot!

Brann Bronzebeard
You're in my way!
Mister Chu
...that is my line.

Mister Chu
I am not here to listen.

Mister Chu
Changed your mind yet?
It is time for business.
Knew I had this somewhere...
Step aside!
This will do.

Mister Chu
A job is a job.
I took up gem collecting. Can you tell?
The sooner I stop you, the sooner I leave.

This one is best.

It is best if we forget the past.

Have we worked together before?

Who let this one in?

Mister Chu
The boss has marked you. Turn back now.

Mister Chu has been a henchman in The Dalaran Heist.

Mister Chu is the bodyguard of Madam Goya. He was originally found accompanying her at the Black Market in the Veiled Stair and later relocated with the rest of the Black Market to the Ring of Blood in Nagrand, followed by the Underbelly in Dalaran.