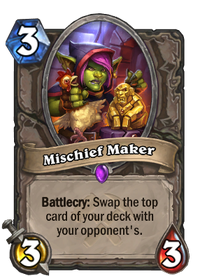 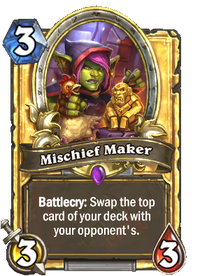 Battlecry: Swap the top card of your deck with your opponent's.

Fair trade is for noble-minded suckers with dignity and honor.

Mischief Maker is an epic neutral minion card, from the Saviors of Uldum set.

Mischief Maker can be a unique Tech card against Combo-based decks, potentially stealing an essential card. This can also give you generally powerful cards, while you may give a useless card to your opponent. However, because of the symmetrical and often unpredictable results, the same can always happen to you.

Playing Mischief Maker with Brann Bronzebeard or other Battlecry-doubling effects is pointless, since the second Battlecry will revert its first effect.

Using a deck tracker, you can know what card Mischief Maker gives to your opponent, providing you with information to possibly win the game.[1]

Demon Hunters can combine Mischief Maker with Sightless Watcher, guaranteeing which card they give to their opponent.

It is a particularly good counter to Lorekeeper Polkelt, allowing you to steal the high-Cost card they planned to draw next turn.