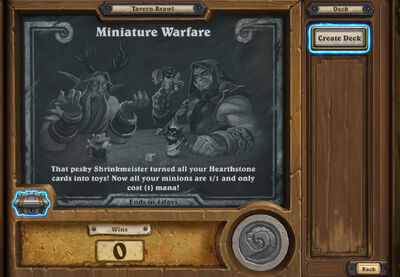 "That pesky Shrinkmeister turned all your Hearthstone cards into toys! Now all your minions are 1/1 and only cost (1) mana!"

Miniature Warfare is a Tavern Brawl. It debuted on January 27, 2016. For exact times, see the schedule.

This Brawl sees players doing battle using classes of their choosing. During the Brawl, a special non-removable enchantment is given to each minion, changing its base stats to 1/1, and its mana cost to 1. However, buffs can still increase minions' stats beyond 1/1.

The low cost of minions allows players to play normally expensive minions from turn 1, and also allows them to empty their hands much more quickly than usual. Card draw can be useful in compensating for the unusually rapid outpouring of minions. Chromaggus is a good pick in this regard, especially with an immediate card draw available, or with some way to ensure its survival until the next turn. The warlock's Life Tap can provide a steady source of cards, although the low damage potential of most cards can make the Hero Power's drawback a high price to pay, especially in the later game. However, this Brawl's cost reduction is matched by a reduction in stats, making minions' abilities and card text the main consideration.

When building a deck it's important to remember that minion stats and costs will not survive into the Brawl; for example, North Sea Kraken is strictly better than Fire Elemental, which is strictly better than Stormpike Commando, which is strictly better than Elven Archer. This often contradicts ingrained familiarity with the value of cards, with poor cards outperforming those that are normally highly prized. Abilities are put into the spotlight, often making cards with low stats for their cost far more desirable. Varian Wrynn becomes a superb card, especially in a minion-heavy deck, drawing or putting into play four cards in total for just 1 mana. In contrast, minions with Overload are usually undesirable, due to their disproportionately high overall cost. 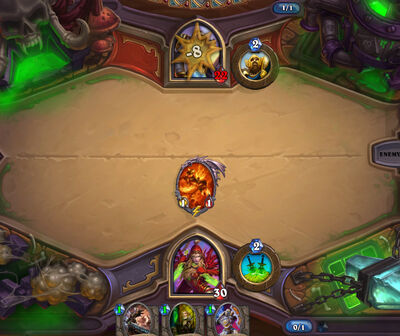 Aggressive turn 1 strategies are surprisingly effective during this Brawl

Stat buffs and AoE removal are the order of the day in this Brawl. Minions like Dark Iron Skulker, Knife Juggler, and Despicable Dreadlord provide excellent removal abilities at minimal cost, as do Battlecry damage minions like North Sea Kraken and Primordial Drake. Stampeding Kodo and Shadow Word: Horror is capable of targeting most minions, but can work around Stealth, increased Health and Divine Shields. Minions with Charge and Divine Shield (Argent Commander, Argent Horserider) gain a similar effect, although with the potential for increased damage if combined with Attack buffs. AoE spells like Whirlwind, Fan of Knives, Arcane Explosion, Maelstrom Portal, Spirit Lash, Explosive Trap, and Holy Nova are almost guaranteed board clears, although Health buffs can prevent this. Shiv is an excellent pick, essentially giving free removal. Likewise Mortal Coil brings an almost guaranteed card draw to replace it.

Cards that summon other minions can provide excellent value and board control. Basic options include 2-for-1s like Murloc Tidehunter, Razorfen Hunter, Echoing Ooze, and Green Jelly, while others such as Dr. Boom, Sindragosa, Haunted Creeper, Eggnapper, and Wobbling Runts provide 3 or 4 minions for the price of 1; Onyxia tops the list, summoning up to 7 minions for the price of 1. Cards which repeatedly summon minions, such as Murloc Knight or Silver Hand Regent, can provide good value if they can survive long enough, while Dreadsteed and Fungalmancer provide massive value due its low stats no longer being a handicap. A slightly more expensive option is Imp-losion, combining removal with summoning 2-4 minions. Similarly, Muster for Battle deserves a special mention for both its spread of Silver Hand Recruits and its Light's Justice, which can often be used to remove separate four minions before expiring, providing a massive board control opportunity for just 3 mana. Both of these spells combo easily with Knife Juggler for extra damage, as do all minions which summon other minions.

Buffs from minions like Houndmaster, Keeper of Uldaman, Bonemare, Fungalmancer, Stormwind Champion, Anubisath Sentinel, and Cenarius can allow your minions to trade very favourably against the opponent's for just 1 mana. Hobgoblin provides amazing value in this Brawl, buffing every minion played to a 3/3. Spell buffs cost more, but can prove to be just as useful. Cards like Mark of the Wild, Velen's Chosen, Avenge, Dark Wispers, Spikeridged Steed, and Dinosize can make a single minion hard to kill and hard-hitting, while AoE buffs like Mark of the Lotus, Competitive Spirit, Bolster, Strongshell Scavenger, and Wisps of the Old Gods are highly valuable when swarming with minions. Hand-buffing cards like Smuggler's Run and Grimestreet Enforcer can prove just as powerful.

Minions that can snowball with stats are also powerful in this brawl. Blood Imp, Shadow Ascendant, Boneguard Lieutenant, Crypt Lord, Floating Watcher and Kvaldir Raider are all good sources of ongoing Health buffs. Questing Adventurer is especially if immediately followed by a few other cards. Shade of Naxxramas, especially if played early, can provide great value. Edwin VanCleef and Biteweed can turn into huge minions with a big enough hand. Wicked Skeleton is a strong follow-up after a board clear. C'Thun can also turn huge early on or a cheap and powerful finisher with the right amount of support.

The value of buffs in turn provides some value for Silences like Ironbeak Owl and Spellbreaker.

Due to the presence of so many minions, in addition to aura buffs, many decks can make good use of board synergy cards like Frostwolf Warlord and Enhance-o Mechano.

The reduced cost of minions makes a Shadowstep combo entirely free, which can be useful for reactivating Battlecries. Conversely, return effects like Vanish and Sap are generally far less effective, unless the player has too full a hand to accommodate the return of all their minions.

Shadow Essence summons a 5/5 minion, which makes it an all-around powerful card.

Hero Powers like Fireblast, Shapeshift and Dagger Mastery function to remove almost any minion, while the Totems generated by Totemic Call are also set to 1/1. Reinforce is unchanged, but its value is dramatically increased. Life Tap has great potential due to the ability to empty the hand so quickly.

Many powerful minions are made far more accessible by this Brawl, and while their stats are rendered irrelevant, their reduced cost means their abilities can be brought into play from the start of the game. A strong turn 1 play is Ragnaros the Firelord; if the opponent has not yet played a minion, this is a guaranteed 8 damage to the face to start things off. Alexstrasza is even stronger, immediately setting the opponent's Health to 15. Dr. Boom is a good play due to providing three minions for the price of one, plus the Boom Bots' Deathrattles. Chromaggus is an excellent possibility for card draw. Kel'Thuzad, while hard to protect for long, has great trading potential. Onyxia provides up to 7 minions for the price of 1. Sylvanas Windrunner is still a good deterrent, although the disposability of most minions make it easier to dodge her Deathrattle; for priests, Cabal Shadow Priest is usually superior, providing a similar (but immediate) 2-for-1 due to minions' reduced Attack. Many other powerful cards such as Ysera and The Lich King likewise become much more accessible.

Access for spell-oriented decks is also expedited due to the lower cost of certain critical minions. Archmage Antonidas is available earlier, but more importantly can be easily comboed with several spells to provide immediate value and a potential win condition. The 1-cost Malygos and Prophet Velen makes high-damage spell decks such as freeze mage and Mind Blast-priest highly accessible, as well as enabling a variety of one turn kills. Even without a dedicated deck, Countering the opponent's board is facilitated through minions like Baron Geddon, Abomination, Twilight Flamecaller, Primordial Drake, and Despicable Dreadlord with their reduced cost making them readily available for stalling.

Turn one kills are possible during this Brawl, thanks to Alexstrasza and Ragnaros the Firelord. With two copies of Innervate or Counterfeit Coin, Alexstrasza (reducing the opponent's Health to 15), Ragnaros, then Faceless Manipulator to copy Ragnaros deals 16 damage to enemy hero at end of first turn for lethal. Players going second has more chance to draw the right cards thanks to The Coin, but there is also a higher chance the opponent can screw up this combo by playing a minion.

This Brawl shows Shrinkmeister to be far more powerful than anyone ever realised, since he normally only reduces a single minion's Attack by 2 for a single turn.