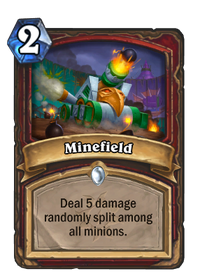 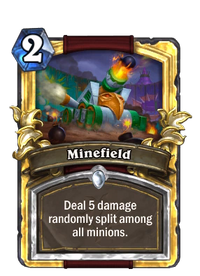 Minefield is a common warrior spell card, from the Madness at the Darkmoon Faire set.

Minefield can be obtained through Madness at the Darkmoon Faire card packs, through crafting, or as an Arena reward.

An efficient source of board control. As a symmetrical effect, this card belongs in a deck that runs few minions, or at least expects to be behind on the board. Before playing Minefield, you should trade and use other damage as appropriate to make sure that all minions have five or less total health to remove the randomness from this effect.

Since Minefield doesn't need a target, it's perfect for getting rid of Stealth minions.