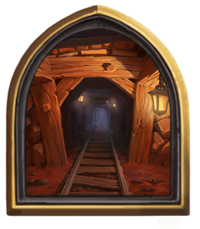 Escape the troggs in this “super safe” mine cart!

Mine Cart Rush is a boss encounter found in the League of Explorers adventure. It is the second boss of the adventure's second wing, Uldaman.

Like Temple Escape, Mine Cart Rush is an escape encounter. The opposing hero is Immune and does not have a Health count. Rather than defeating the hero, to win this match you must survive until the "turns to escape" count reaches 0. The boss has a deck, but does not play cards or draw cards at the start of the turn. The boss uses its Hero Power Flee the Mine! at the start of every turn to summon minions. The "turns to escape" count goes down at the end of the boss' turn.

Additionally, the player does not choose a deck or control one of the usual heroes. Instead, the player's hero is the Mine Cart, their Hero Power is Throw Rocks, they are locked at two Mana Crystals, and they use a pre-made deck of 1-mana cards.

The boss' Hero Power Flee the Mine! summons 2 of the below minions onto the boss' side of the board (3 minions the first time it is used). The selection is random, although the chances are uneven, with the more powerful options more common in Heroic mode. Debris is rarely seen, and may be excluded from Heroic mode. 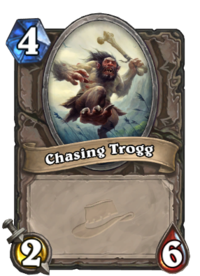 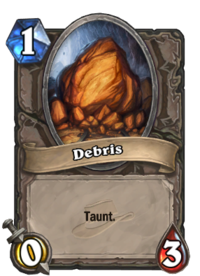 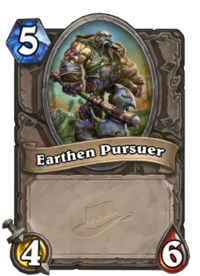 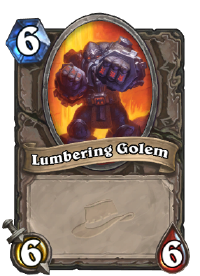 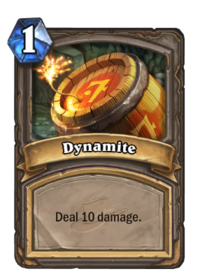 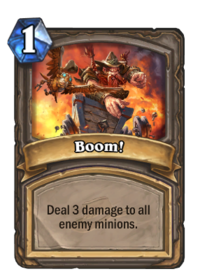 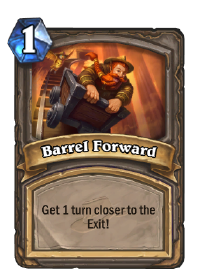 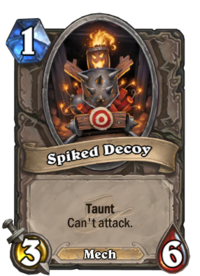 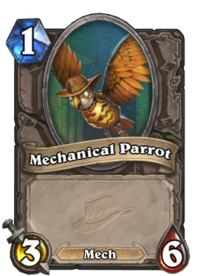 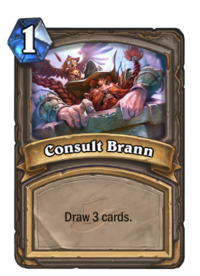 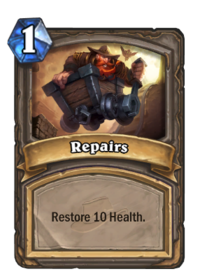 Rock was assumed to feature in this encounter, but appears to have been removed during development. 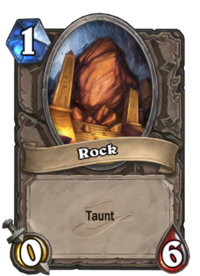 The boss in this encounter has a deck of 30 cards, but does not use them during the encounter. Instead, the boss summons the various minions listed above through its Flee the Mine! Hero Power.

The player uses a premade deck in place of their own. The special cards are listed visually above.

While the deck has 30 cards in total, the precise quantity of each card is unknown, due to the turn limit of the encounter.

The boss always goes first, but the player does not get The Coin. At the start of the first turn the boss' Hero Power summons 3 minions; at the start of each subsequent turn it will summon another 2.

The boss generally goes face whenever possible, but will sometimes use Chasing Trogg to trade.

At this difficulty, Spiked Decoys are mandatory as the most efficient way to clear 2/6 troggs. In an ideal scenario, this will buy the most time. You will likely need one in your opening hand, and may need to reroll the hand to ensure you get at least some of these cards.

Secondly, release Mechanical Parrots to help clear the 4/6s and deal some swift strikes against the remaining 2/6 enemies. Board control is essential to prevent 'face' aggro.

Dynamite is essentially targeted removal, and best kept to immediately use on Lumbering Golems. Their presence is very dangerous to both your board and your cart, and should be removed as soon as possible.

Keep your area of effect card, Boom!, until it can kill at least 3-4 enemies, and damage several more for advantageous trades with your minions. Two of them will immediately wipe the board.

Use Consult Brann if desperately in need of a taunts or removal, or otherwise when enemy presence is weak to refill a short hand.

Throw Rocks is best used to immediately kill an enemy, but can be used to trade with a minion, or if you are out of useable cards.

Do not use Barrel Forward unless on the last few turns it will secure an instant or next turn win.

Heroic mode is the same as Normal mode, other than having a higher chance to summon bigger minions. Debris does not seem to be summoned. 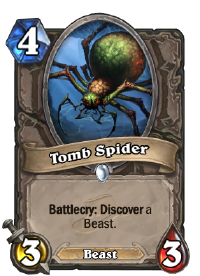 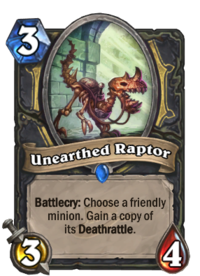 Brann Bronzebeard
This mine shaft leads straight to the center of Uldaman!

Watch out, we’re being chased!

BOOM! I’ll load ‘er up for another shot!

Be careful with that stuff! Ye took out a chunk o’ the track!

Haha! Out of our way!

A little gizzard gum and it’s good as new!

Hey stupid troggs! Come and get me!

Do you really have time for that?

After some number of turns

Ha ha! Riding carts and throwing bombs! This is a blast!

Getting there! I wonder what this button does…

MAGNI’S BEARD – IS THAT ARCHAEDAS HIMSELF??

Lost 'em! The headpiece is in the next room!

Mine Cart Rush is original to Hearthstone.