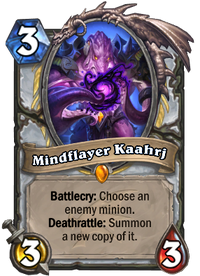 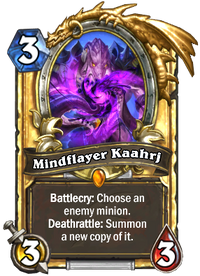 Battlecry: Choose an enemy minion.
Deathrattle: Summon a new copy of it.

Mindflayer Kaahrj is a legendary priest minion card, from the Descent of Dragons set.

Mindflayer Kaahrj can be obtained through Descent of Dragons card packs, through crafting, or as an Arena reward.

Mindflayer Kaahrj has marginally below-average stats for the cost, but its Deathrattle more than compensates. While ideally it can be used to copy high-statted minions, just stealing an on-curve 3-drop already gives a strong, sticky board presence, making this card a good tempo play at almost any stage of the game.

Shadowy Figure can copy Kaahrj's Deathrattle effect to get more copies of a minion.

Summon
You are a prisoner in your own body.
Attack
Master calls!

Mindflayer Kaahrj is a faceless one imprisoned in Violet Hold. It serves as a dungeon boss in Assault on Violet Hold.

Mindflayer Kaahrj is a pustule of N'Zoth.

This eldritch creature was captured in the depths of Ulduar, ensnared as it lapsed into a catatonic state after the defeat of Yogg-Saron. Since Dalaran arrived at the Broken Isles, the monstrosity has mysteriously awakened, and only the powerful wards of the Violet Hold keep its powers in check. 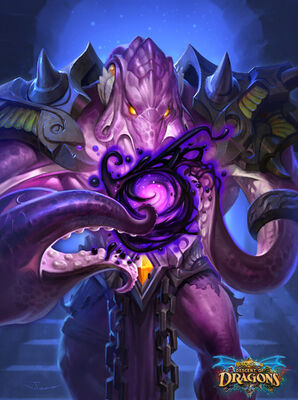