Millhouse Manastorm is a hero that the player can pick in the Battlegrounds game mode. 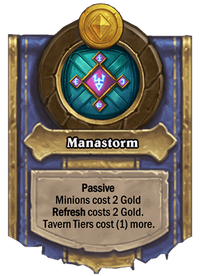 Millhouse's unusual Hero Power requires him to be played in a very different way than most other heroes. At 2 Gold per purchase, he can buy up to 5 minions per turn at max Gold, giving him much more buying power throughout the game. In the early game, he can buy two minions at turn 2 for a powerful early-game start, use token-generating minions to "bank" gold, and swap out old minions for better ones more efficiently as he tiers up. As a downside, his Reroll cost is doubled, making it more difficult for him to find specific minions and leaves him more vulnerable to bad RNG, and upgrading a tavern tier costs 1 more gold, making it more difficult to rank up early even with a strong lead.

When playing as Millhouse, buy aggressively in the early game and make the most out of your refreshes. It's generally better to hoard minions in your hand and sell them later than to spend money on rerolls looking for specific minions. Battlecry buff minions are particularly valuable for Millhouse since he can play more minions per round, allowing him to apply these buffs more frequently, as are minions with built-in scaling like Iron Sensei, Razorgore, the Untamed, and Salty Looter since they can gain stats regardless of the outcome of your rolls. Unless you roll core late-game minions like Kalecgos, Arcane Aspect or Mama Bear early, it's generally advised to avoid going for builds that rely on them due to Millhouse's reduced number of rerolls.

Millhouse also works well with Elementals. Refreshing Anomaly gives him double the discount compared to other heroes, and because many Elemental synergy effects scale off from aggressively buying Elementals, Millhouse's reduced purchase cost lets them scale even faster.