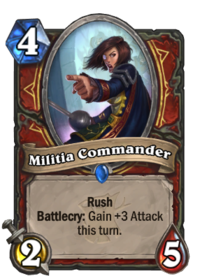 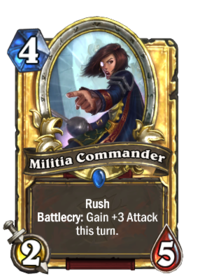 She only needs two commands: "Heel" and "Sic 'em!"

Militia Commander is a rare warrior minion card, from the The Witchwood set.

This minion provides strong removal option on a minion. At 5 Attack at 4 Mana, it's able to kill off most minions of relative mana cost while having a large amount of Health to survive trading. It pays for this tempo burst with a weak base Attack it has on the following turns.

Like other Rush cards, it's an effective activator for effects involving damaged minions like Battle Rage and Frothing Berserker.

Summon
Defend the gate!
Attack
To me!