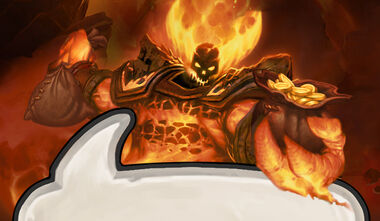 "IT IS NEVER TOO SOON TO CELEBRATE ME, INSECTS!"

The Midsummer Fire Festival is a Hearthstone event themed around Ragnaros the Firelord.

The first Fire Festival lasted between July 5 and July 19, 2017 and featured special emotes and the themed Tavern Brawl Ragnaros' Fire Festival, as well as causing all quests completed during the event to reward twice their regular amount of gold. The Fire Festival was immediately followed by the Frost Festival, an event instead themed around Ragnaros' rival Ahune. 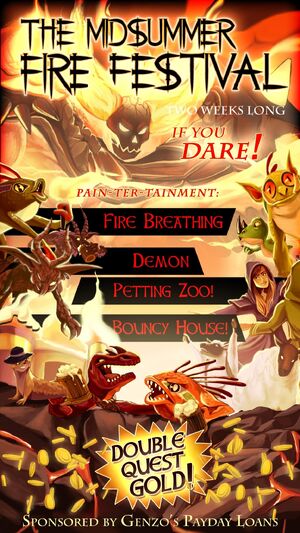 Official poster for the Fire Festival.

Blog
IT IS I, RAGNAROS THE FIRELORD, AND IT IS TIME TO PARTY, INSECTS. THE MIDSUMMER FIRE FESTIVAL BEGINS TOMORROW, AND YOU WILL CELEBRATE IN MY HONOR.

I HAVE MADE ARRANGEMENTS:

THERE WILL BE A SPECIAL TAVERN BRAWL FEATURING ME, AND ALSO SMALLER ME.

YOUR EXPRESSIONS OF AMAZEMENT WILL BE AS EXPLOSIVE AS MY DANCE MOVES.

NOT IMPRESSED YET, INSECTS?

AT MY PARTY YOU WILL ALSO EARN DOUBLE GOLD WHEN COMPLETING QUESTS.

THE MIDSUMMER FIRE FESTIVAL BEGINS JULY 5.
DO NOT MISS IT!

BY FIRE (FESTIVAL) BE ENTERTAINED![1]

Video
"ATTENTION INSECTS AND MANIACS! TRUE WARRIORS ARE BORN IN FIRE, AND SO IS THE HOTTEST FESTIVAL THE REALM HAS EVER SEEN: THE MIDSUMMER FIRE FESTIVAL! COME EXPERIENCE THE HEAT OF MY MAGNIFICENCE IN THIS TWO-WEEK INFERNO OF PAIN-TER-TAINMENT! SYNCHRONIZED FIRE BREATHING, BURNING BOUNCY HOUSE, MAGNATORY BAR BRAWL, AND DEMON PETTING ZOO! PLUS, YOU WILL BE EARNING DOUBLE GOLD ALL FESTVIAL LONG! STARTING TODAY, COME LOSE TO ME, IF YOU DARE! AND I DARE YOU TO DARE. SO THERE! RAGNAROS RULES! BROUGHT TO YOU BY GENZO'S PAYDAY LOANS, BECAUSE YOU'RE GONNA NEED A LOAN TO PAY FOR ALL THAT FIRE DAMAGE. IT'LL ONLY COST AN ARM AND A LEG."[4] 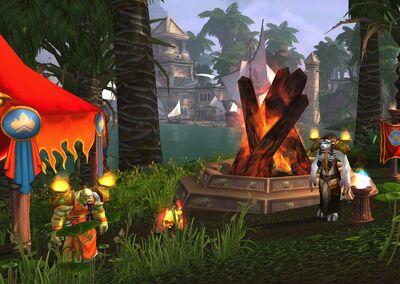 The Fire Festival in World of Warcraft.

In World of Warcraft, the Midsummer Fire Festival is a world event which lasts from late June to early July. During the event, bonfires, tents and ribbon poles are set up in zones across the world. Players can honor their own faction's bonfires, desecrate the opposing faction's, steal the bonfires from enemy capital cities, and perform tasks like juggling or throwing torches to gain Burning Blossoms, a currency used to purchase special pets, toys, heirlooms, food items and Midsummer-themed clothing. Players can also dance around the ribbon poles to gain a temporary buff to experience gain.

During the course of the event, players can also aid the shamanic Earthen Ring in uncovering and intercepting a plot by the sinister Twilight's Hammer cult to incite a devastating war between Ragnaros the Firelord and Ahune the Frost Lord, which would lay waste to Azeroth. Players can journey into the Slave Pens in Outland and battle Ahune directly for a chance at special cloak items, a frosty scythe, a miniature ice elemental pet and a number of Burning Blossoms.

While Ragnaros is referenced several times during the festival, such as in the aforementioned Twilight's Hammer plot and in the form of Summer Scorchlings — tiny fire elementals which, upon being given a special incense by players, briefly transform into a "Wisp of Ragnaros" and give players a glimpse of the Firelord himself — the Lord of Fire is not the focus of the Midsummer Fire Festival to the same extent that he is in the holiday's Hearthstone counterpart.