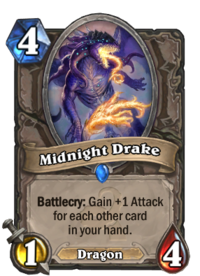 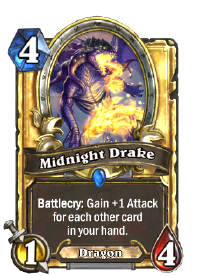 Battlecry: Gain +1 Attack for each other card in your hand.

Still fearsome in the daytime.

Midnight Drake is a rare neutral minion card, from the Whispers of the Old Gods set.

Midnight Drake can be obtained through Whispers of the Old Gods card packs, or through crafting.

This is a more aggressive version of Twilight Drake. It similarly fits in decks revolving around building a large hand. Its high Attack could be useful for Shadowflame, but probably makes it more useful as a finishing minion similar to Molten Giant or Mountain Giant. However, Midnight Drake lacks the Health of these minions, making it a poor target for Sunfury Protector or Defender of Argus.

This is the corrupted version of Twilight Drake. Interestingly enough, twilight drakes themselves are already minions of the Old Gods, created by their worshippers and wielding their magic. Perhaps the Midnight Drake is an evolution of some sort, a twilight drake given more power by its masters and further blessed.

However, despite being a mutated drake, this minion more closely resembles a proto-dragon, the ancestors of modern-day dragons. The broader body, wider jaw, minuscule eyes, and scale-plates lining the top of the skull are all more typical of proto-drakes than modern drakes.