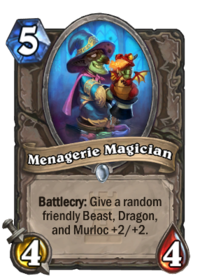 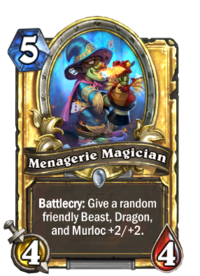 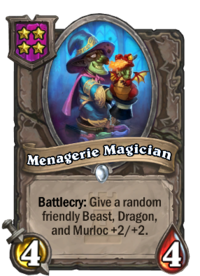 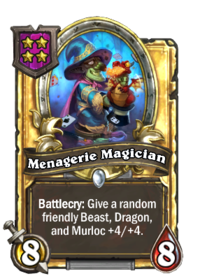 Battlecry: Give a random Beast, Dragon and Murloc +2/+2.

Just between us, if things get tight the Menagerie Magician position will probably be the first to go.

Menagerie Magician is a common neutral minion card, from the One Night in Karazhan set.

Two copies of regular Menagerie Magician are obtained by completing The Menagerie, the third wing of One Night in Karazhan.

As a Wild format card, both regular and golden versions of Menagerie Magician can also be crafted for the following amounts:

Without its Battlecry, this minion offers poor stats for its Mana cost. However, if at least one minion gets buffed while playing this you get good value. If you manage to buff two or even three minions, the value is immense.

If you play this card on curve you will only get the Battlecry value if your opponent failed to remove all Beasts, Murlocs, and Dragons. In the late game you can play a cheap minion and immediately follow up with the Magician, but at that stage in the game your opponent is likely to have better options to deal with it.

Summon
And now for my next trick.