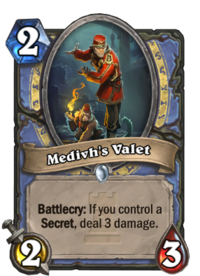 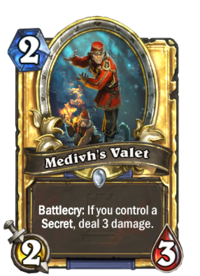 Battlecry: If you control a Secret, deal 3 damage.

Medivh's Valet is a common mage minion card, from the One Night in Karazhan set.

Two copies of regular Medivh's Valet are obtained by defeating Shade of Aran, the first boss in One Night in Karazhan's fourth and final wing, The Spire.

As a Wild format card, both regular and golden versions of Medivh's Valet can also be crafted for the following amounts:

A cornerstone Secret Mage card, which provides a Darkbomb on a premium statline. The condition can be fulfilled on turn two with a Kabal Lackey or coined Ancient Mysteries, but remains powerful throughout the game.

This minion works extremely well in a Freeze Mage deck where its Battlecry will most often activate, because Ice Block, a key card for such deck, is a secret that is difficult to reveal and will likely remain hidden throughout nearly the whole game.

Summon
Excuse me. You are on fire. *Monkey sounds*