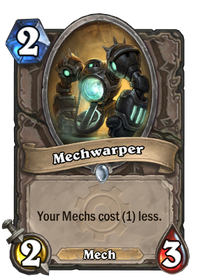 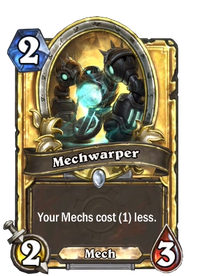 Mechwarper is a common neutral minion card from the Goblins vs Gnomes set.

Mechwarper can be obtained through Goblins vs Gnomes card packs, or through crafting.

Ideal in decks with many Mechs. If followed with 1 or 2 Mechs, this card can be considered to have been a reasonable play in terms of mana. Its own Mech type means it can provide additional benefits with Mech-synergy cards like Mimiron's Head.

Players can use multiple Mechwarpers to cumulatively lower the cost of summoning Mechs. This can be a more efficient way to take advantage of its effect, and can allow expensive Mechs to emerge at least 2 turns early. With 2 Mechwarpers on the board and The Coin in hand, the player can summon Foe Reaper 4000 on turn 5, or Fel Reaver on turn 3.

Order of play can be important in Mechwarper combos. Mechwarper will of course reduce the cost of other Mechwarpers, meaning it costs only 3 mana to summon 2 Mechwarpers. A single Mechwarper will make 1-mana Mechs like Clockwork Gnome and Warbot free to summon, with a second Mechwarper spreading this to 2-drops like Annoy-o-Tron, Snowchugger and Shielded Minibot.

Mechwarper's cost reduction enables the player to suddenly place a large number of Mechs onto the board, a strategy that is often wise given the likelihood of the opponent removing Mechwarpers as soon as they appear. This means it often makes more sense to wait to turn 2 to play Mechwarper, The Coin, Annoy-o-Tron, to provide a little protection, or even wait until you can afford to play two Mechwarpers and a raft of Mechs that turn, rather than to play out Mechwarpers alone, or one at a time.

If the player is able to make use of their effects before the opponent removes them, the mana spent on summoning Mechwarpers can be easily recouped in the reduced cost of other Mechs. Combined with Galvanizer and Magnetic minions, it is easy to create a very large board in the opening turns of the game. 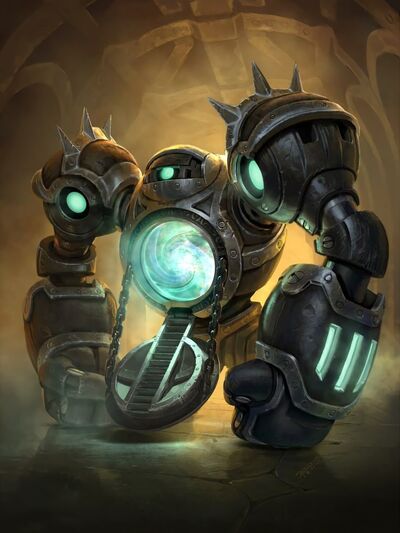