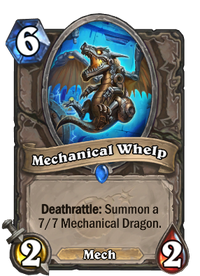 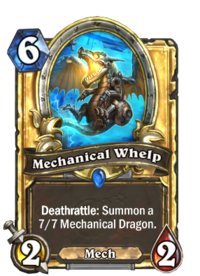 Mechanical Whelp is a rare neutral minion card, from The Boomsday Project set.

Mechanical Whelp can be obtained through The Boomsday Project card packs, or through crafting. 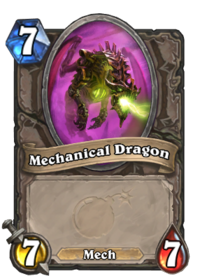 As a Mech, it also has powerful synergy with Dr. Boom, Mad Genius. With Rush, it can trade into an enemy minion to kill it off on the same turn while the 7/7 Mechanical Dragon also gains Rush for additional removal. Also works well with Oblivitron, bringing in a huge amount of stats.