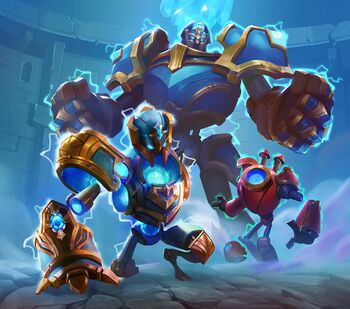 Mech Paladin is a Paladin deck type focused around mechs and mech synergy. It aims to overwhelm the opponent by compounding buffs and Magnetic minions to create an extremely stacked minion. Mech Paladin comes in two variations: an aggro version which uses aggressive early-game token mechs like Hot Air Balloon, Sky Claw, and Replicating Menace, or a midrange Quest version coupled with Making Mummies to create an extremely sticky board with Mechano-Eggs with Kangor's Endless Army to gain second wind.

Previously overshadowed by Odd and Even Paladin, Mech Paladin rose to power in the Year of the Dragon standard as the dominant Paladin deck, following their early Hall of Fame retirement. In Saviors of Uldum, Mech Paladin often overlapped with Quest Paladin for abusing Mechano-Egg with Reborn, and Descent of Dragons created an aggro variant of Mech Paladin for Standard, utilizing Sky Claw and Micro Mummy for early game aggression. In Wild, Mech Paladin is played primarily as an aggressive deck, using powerful Goblins vs Gnomes mechs as target for Magnetic buffs with Divine Favor to entirely cover for card draw.