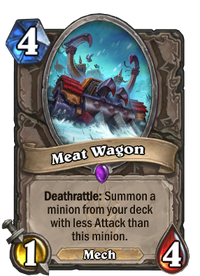 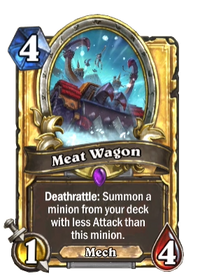 Deathrattle: Summon a minion from your deck with less Attack than this minion.

Necromancers call it "Meals on Wheels."

Meat Wagon is an epic neutral minion card, from the Knights of the Frozen Throne set.

Meat Wagon can be obtained through Knights of the Frozen Throne card packs, or through crafting.

This card is very understatted and its Deathrattle, while tricky to utilize, does have potential for high-value returns. The most straightforward way to increase its value is to buff its Attack, which makes it more likely to return stronger minions. Being a Mech, an ideal buff can be Magnetic minions. Ideally, high-cost, low-Attack minions with end-of-turn or Deathrattle effects like Ysera are excellent pulls, but the downside to this strategy is that it also increases the variance of returned minions, making it less reliable.

Alternatively, this card can be used in a deck containing a few 0-Attack minions to reliably summon them from your deck. Good minions to use for this strategy include Doomsayer, Summoning Portal, Devilsaur Egg, Mechano-Egg, and Validated Doomsayer.

One of the strangest and most dire tools utilized by the Scourge is the dreaded meat wagon. This rickety contraption is used to collect and store recently slain corpses from the field of battle. At any time, corpses can be pulled from the meat wagon and raised into undead warriors. When upgraded, the meat wagon can also fling diseased corpses at enemy units with its crude catapult device. An invaluable support vehicle for the Scourge, the meat wagon strikes fear and woe into the hearts of even the most resolute defenders.