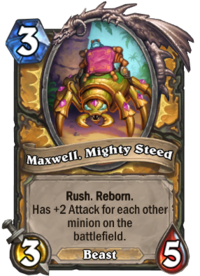 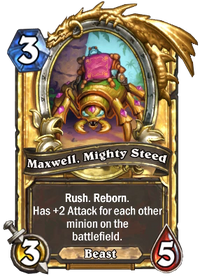 Rush. Reborn.
Has +2 Attack for each other minion on the battlefield.

No murloc in shining armor would ride into combat without his trusty battle-beetle!

Maxwell, Mighty Steed is an uncollectible paladin minion card used in Tombs of Terror. It is one of Sir Finley's signature treasures.

It is unlocked by defeating 5 bosses. 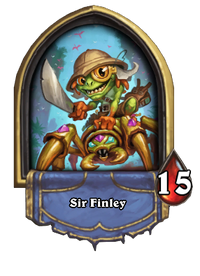 Maxwell is an amazing card in it of it self, but combine it with cards like Windfury or by using Finley's hero power Power Up!, and it's practically unstoppable, even more so with a full board. Reborn also ensures that hard removals like Assassinate are less effective, unless it's transformed by cards like Plague of Murlocs or Devolve.

Maxwell is unique to Hearthstone. A giant jeweled scarab beetle serving as Finley's steed, it has been seen alongside Finley, notably in the Saviors of Uldum key art and announcement trailer.