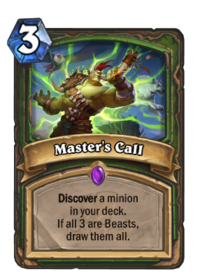 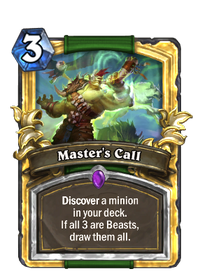 Discover a minion from your deck. Draw all three cards if they are three Beasts.

Master's Call is an epic hunter spell card, from the Rastakhan's Rumble set.

Master's Call can be obtained through Rastakhan's Rumble card packs, or through crafting.

Master's Call has a unique flexibility in deckbuilding, as one can use it to draw a specific card in your deck, forgoing the Beast tag; or the user can include only Beasts in your deck and guarantee a very cost-effective draw mechanic. If Master's Call lands on only Beasts, it's highly efficient compared to Arcane Intellect for the same mana or Nourish for the same amount of cards drawn.

Since this card is a spell which can only draw minions, it can be used in Spell Hunter with a handful of minions to clear out your deck.

This card works well with Barnes and Y'Shaarj, Rage Unbound, if those are the only minions in your deck. On turn 3, if neither were drawn, the Hunter can cast Master's Call and Discovers Barnes, which they then can play on turn 5. If Y'Shaarj is still in the deck, Barnes can summon him for a devastating 14/15 worth of stats.

Master's Call is an honor talent for Survival hunters in World of Warcraft. It causes the hunter's pet to instantly remove and grant temporary immunity against all movement-impairing effects on itself and another friendly target.