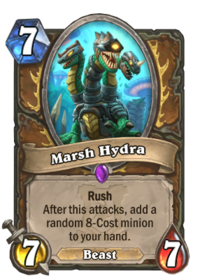 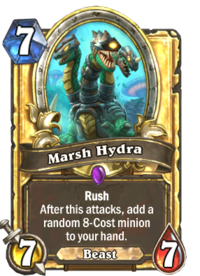 Rush
After this attacks, add a random 8-Cost minion to your hand.

Marsh Hydra is an epic druid minion card, from the Ashes of Outland set.

Hydras are three-headed amphibious beasts native to both Azeroth and Outland. Historians have long disagreed about whether the immense hydras of Azeroth and Outland share a common ancestor. What is clear, however, is that these ruthless creatures have existed on both realms since ancient times. Each head appears to display a level of independent behavior. The forms of hydras vary somewhat between the two worlds.

This particular Zangarmarsh hydra has apparently been outfitted with armor by the Rusted Legion.