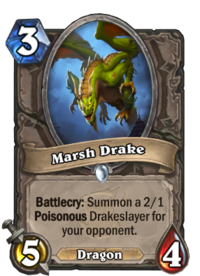 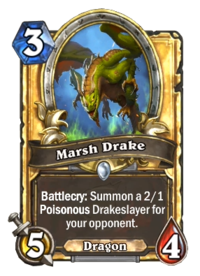 Battlecry: Summon a 2/1 Poisonous Drakeslayer for your opponent.

She would have gotten away with it, if it weren't for that meddling Drakeslayer.

Marsh Drake is an neutral common minion card, from the The Witchwood set. 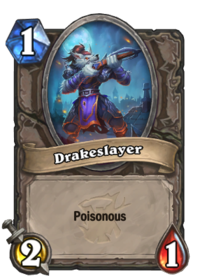 This minion has very high stats, but its Battlecry makes it detrimental as a stand-alone minion. Therefore, it should not be played unless you have some way to kill the Drakeslayer on the same turn. Trading it with a weak 1/1 minion or using your Hero Power works. The best method of dealing with the Drakeslayer is by equipping a weak weapon like Wicked Knife or Candleshot prior to playing Marsh Drake and attacking the Drakeslayer with your hero. This allows you to play it on curve with minimal tempo loss to take full advantage of Marsh Drake's strength.

In Wild, Priests can combine this with Potion of Madness for what is effectively a 4-mana 5/4 with hard removal.

This is a bad card in Arena for classes that are unable to deal 1 damage with their hero power; however it's a reasonable mid-game choice for classes that can remove it easily, like Mage or Rogue.

Summon
I will be your doom!