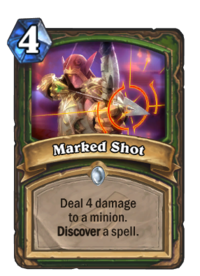 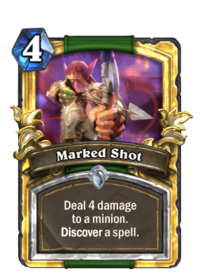 Deal 4 damage to a minion.
Discover a spell.

Obviously it's marked for greatness.

Marked Shot is a common hunter spell card, from the Rise of Shadows set.

This card is solid for any Hunter deck focused around Spells that is focused more on control/tempo than on aggression. Its Discover effect provides a degree of flexibility as well.

Marked Shot is a Marksmanship hunter ability which rapidly fires shots at all targets afflicted by the hunter's Hunter's Mark debuff. It also applies the Vulnerable debuff for 7 seconds, increasing the damage taken from the hunter's Aimed Shot and Piercing Shot abilities.